The end of infradig...from my perspective 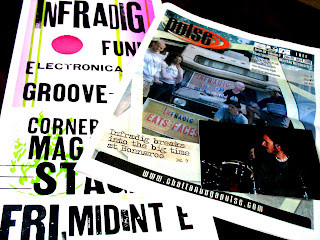 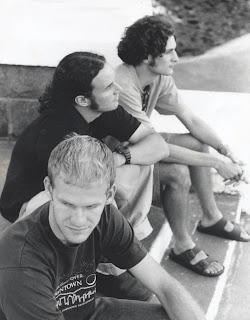 Some months ago I noticed a certain pensiveness in Josh's demeanor. I couldn't put my finger on it. I asked a couple of times but didn't want to press the issue. And then one night he told me, "I think I'm gonna pull the plug on infradig." I was shocked and almost immediately felt a lump in my throat.

I met Josh when I was 18 years old and came to see that rhythm and creativity and music flowed through him like blood through his veins. Music is a part of him just as much as his eyes are deep brown. In college I would do pottery in the downstairs of the art barn while the sounds of his band wafted through the upstairs windows where they practiced. I remember the first time I heard him play. His energy and intensity was amazing. Enough to make me weak in the knees, and not too much later I was their biggest fan, at every show, selling their merchandise, watching crowds be mesmerized by their music, and then helping pack up all Josh's one hundred and one drums, shakers, tambourines, pool hoses and all other manner of percussive devices. I spent more nights than I could count in bars till 3 or 4 in the morning with just enough energy left to shower so I wouldn't have to crawl into bed smelling like an ash-tray. I even got DUI'ed after a show once without drinking a single drop of alcohol, but that's another story.

We eventually moved to Atlanta for a year to try out the music scene there. Then one summer after the birth of Juden we took to the road in two old RV's. One for our little family and the other for the rest of the band. The guys in the band looked out for me and kind of became like brothers which is a good thing since we occasionally had to share a hotel room and a small RV when ours broke down. I was hesitant at first to agree to it with a four month old baby, but it turned out to be a most grand adventure. It seemed to be a perfect age to take a baby since it was pretty comfortable in our little home on wheels and there were plenty of stops for nursing and playing. I could go on and on about this summer but here are a few highlights:

1- Climbing to the tippy top of of a snow covered mountain in Colorado.(okay, almost, I had to turn back to take shelter with Juden because of an impending thunderstorm.)

2-Visiting a place called the City museum in St.Lois. This is quite possibly one of the coolest places I've ever been complete with a skate park for running on, mosaics, tunnels and secret passages you literally could get lost in, and an old-school almost eery carnival section with a tiny little movie theatre. It's kind of like a bunch of kids and artists got together and let their imaginations run wild and take shape.

3- Crashing Dave (bass player) Kauffman's family reunion at Kono Christian school in Iowa. It was like a little respite for me. I felt a tad shy since I am not a Kauffman/Belz but they welcomed us without hesitation. It was an honor to get to be a part of celebrating God's goodness and faithfulness to such a wonderful family. We sang and played music and I enjoyed showing off Juden to all the adoring grandmas and aunties. I'd never been to Iowa before, and man, those big open skies and the sun setting over the corn fields...breath-taking.

4- Meeting Marvin, a short, pudgy little old gentleman who snatched up our vagabond family off the side of the road after our RV gave out on us. He then gave us dinner and insisted on buying us a hotel room so we would not have to bake all night in the 101-degree Topeka, Kansas heat.

5- Sleeping at the Durham, NC house of a certain club owner who's house was a tripped out sight to behold. Mannequin's and superheroes dangled from the trees in the yard. There were animal printed shag carpets and hot pink striped walls and the constant white noise of the movie screen on the wall that was always left on. Every stinkin square inch of the place was covered in religious icon artwork and vintage toys, sparkly jewels and trinkets. 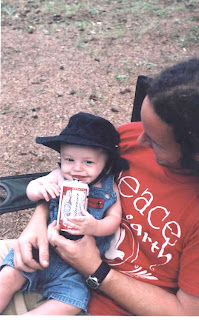 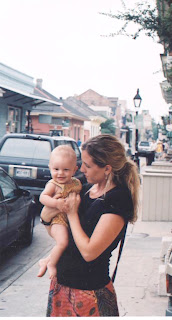 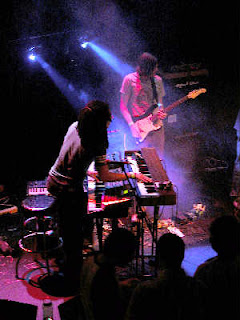 Anyway, back to the music. Music has always been important to me but I was completely ignorant to the whole realm of drum and bass, electronica, hip-hop,funk and what-not. I gotta say, he won me over. Josh expanded my musical horizons and introduced me to the awesome sounds of Mum, Catpower, DJ Shadow and Rjd2. It even took me a while to fully appreciate the intricate compositions, skill, emotion and energy of infradig.
The journey of the past 8 years was not always easy especially when children started arriving. Between practices, promoting and networking, traveling and shows it often felt like Josh had a second full-time job. Just to keep it real,let me just say it took it's toll on me and on our marriage. I always wanted to support him, but when the trials of being on the road reared their ugly head I often did not do a good job, and then just prayed for grace. I got tired of trying to defend my husband's pursuit's to Christians who didn't see the value of artistic musical endeavors without a soap-box evangelical element. The subjectivity of whether or not they were going to "make it" in the music world and lots of words and prayers later led to the decision of ending the band. I must admit that part of me worries that Josh won't feel fulfilled without such intense involvement in something so deeply a part of him, but I am confident that God will open new doors. As we near the end of this awesome chapter in our lives I just don't want him to leave with feelings of defeat. I have watched him pour himself wholeheartedly into this for years and really am so incredibly proud of his dedication ,creativity and of the artistry and soul of the music that was made. For what it's worth,these are my thoughts on the matter and if you made it this far, congrats. It's been on my mind cause life feels so different. We are on the brink of summer and there are no festivals or new cities on the calendar. Our days are filled with finger paints and play dough, baby pools and popsicles. I look forward to the journey ahead. We worship, we work, we play... and it is good
Posted by linda at 6:45 PM

beautifully written. i think that it is so good to sit down and write these things out to simply remember them for yourself and share these bits of your life with others. i have truly appreciated getting to know you and hope to talk more through this kid-filled summer...

I mean I know this is what blog's are for.. but thanks for sharing some intimate details about your life with Infradig. I must say I have always been curious how it is for the green's being full time with a band, work, a family, etc.
Your words are encouraging and I hope God blesses your family's future.

thank you for posting this. we'll miss the music but look forward to what God has for all of you.

Your post is so moving Linda, I got a little choaked up :). It is affecting on so many levels for me. I am very impressed by your stamina and loyalty to infradig. This reflection is such a beautiful reminder of what an adventure it was. I have to say my mom doesn't have alot of good things to say about my dad's band days. The reeeeally early days. But our many travels and those experiences will forever affect my worldview. Can't wait to see what God will bring Josh next!!!

infradig lives on in all of our hearts and minds. your words express some very wonderful things that relate to many aspects of our lives. i suppose for josh and you that this is a huge step out in faith. a risk. i believe as you've so nicely put it that god will fill the deepest longings in josh and your family. he knows the desires of your hearts and he wants to give those things to you. josh will forever be the best drummer in the world to me, there is no defeat. just gratitude for all that he and infradig have done for their audience.

Good to read your expressions about this huge change for Josh and your whole family. There certainly are seasons to our lives. Seasons end, new seasons begin. When something rich and meaningful ends, it doesn't mean it is lost. You will always have these moments, these adventures. They are part of who you and Josh are and always will be. Infradig brought great music, great times, great memories to many people. Love ya. Mom

Thank's all for the kind words and for indulging me in my tribute to infradig, it was fun to recall the journey.

Thanks for writing this Linda. Infradig has a permanent place in my CD collection. I'm glad we got to see them play so many times. The we both live din Atlanta was one we always look back on. You guys are always welcome to try out the musical scene in Boise. I mean, we finally got the Rolling Stones this year.

It's been a while since your post, while I was out of town. My mind travelled back to Josh winning the talent contest in the 6th grade drumming to "When Love Comes to Town." When Josh wanted to do something there was no stopping him. His love of music caused him to practice everyday for hours. I am so proud of that dogged determination that he has and for all the gifts that God has given to him. Reading and remembering was a bittersweet delight. You are the best gift Josh has ever received, just like he told you in his vows.
Love, Mom

I remember being introduced to the concept of endurance/enjoyment in transitions. Simultaneously both finding joy and struggling. My sister's husband is a musician, and I get glimpses of their lives when I read your post. May God bring your family continued peace.