from the mouth of babes 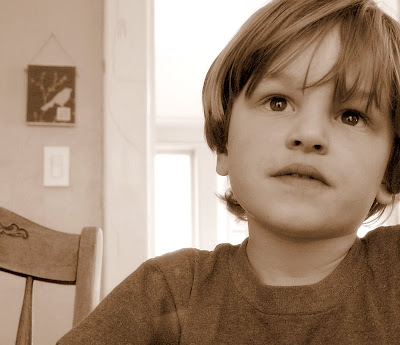 This morning I sat Juden on my lap to play him a song. My kids love music. They want it on all the time and we often play this game where we have to name all the instruments we hear and they are surprisingly accurate most of the time. Juden has pretty broad tastes in music and likes to pretend he is the conductor when classical is on. So I scooped him onto my lap and told him to listen. I told him the man singing was blind, to which he replied,"What is blind?" I told him that his eyes didn't work and that it was always dark to him. I hadn't really thought about this aspect of sharing the song, but his expression immediately fell and he seemed really sad and said, "Oh, the poor man, why did God give him eyes that don't work?" Wow, we mommies are supposed to have the answers. I thought a minute about how to explain something so difficult and said that there are lots of things that are broken in the world and lots of sick or otherwise impaired people, and that made Jesus sad too and that's why He came and made a way to set things right. Still a rather weighty issue for a five year-old mind. I could see that he was still sad, so I told him to see how the man loved to sing and that he wasn't sad even though his eyes didn't work. I told him that we would close our eyes while we listened to see how he felt. He scrunched up his little face and sqeezed his eyes shut tight and we listened...
">
I looked at him with his eyes still shut, rocking his head slowly to the music until the song ended. His face lit up a little and he said,"Ohh, so since he can't see any pretty things, he just sings'em."
Simply put.
I love being his mommy and seeing things the way he sees them.

Posted by linda at 5:23 PM 6 comments: Links to this post