It's a girl! It is so amazing to get a glimpse of the little person growing inside me. Seeing her moving all around made us so excited to meet her and know who she will be. Each time it is always a miracle and a mystery. 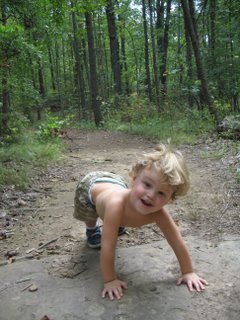 He's such a stinker but he's so darn cute. Juden has been testing me like crazy lately. He has spent quite a bit of time in the time out chair. The other day I heard him up when he was supposed to be napping and opened the door to find him glistening from head to toe. He had emptied an entire tub of vaseline on himself and parts of his room. Man, that stuff is hard to get off. I've been reading Heartfelt Discipline by Clay Clarkson and would welcome any other reccomendations on parenting toddlers.
Also, just wanted to thank everyone for your prayers and support for Josh lately. Our joys outweigh our trials and we are so thankful. Our prayer is that God would heal Josh but more importantly that our dependency and trust on Him would be deepened.
Posted by linda at 10:19 AM 5 comments: Links to this post

Now is time on Sprockets when Josh posts.

First off, this week we learned that I have Ankylosing Spondylitis! 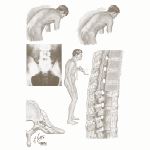 Basically this means that my spine might fuse together! This explains why my hip joint has felt like utter poo for the past year of my life! Not to mention the migratory, spontaneous pains that have baffled numerous doctors and cost our family thousands of dollars!

Alright, I'll put aside the exclamation points for a minute. Obviously this is...uhm...pretty upsetting. The good (?) news here is that we actually now know what in the world is wrong with me.

You might be having a hard time tearing yourself away from the hunching nude in the photo above. You can all rest assured that I will never become this hunching nude. I might become nude, but never will hunch. At least not as a result of this disease.

This is because I will soon "kick AS" if you will. Most will say that AS can't be kicked, but these people do not know me (Kick AS Green). I'll provide more details about this whole deal as people inquire. Obviously, I need prayer from everyone.

In other news, we went to Rocktown today. It was great. Every time I go up to that place (Pigeon Mtn.) I think about spending just about every weekend of my 13th year of life with my Pops up there rock climbing and generally frolicking around the boulders. It's pretty surreal doing the same thing now with my kids. 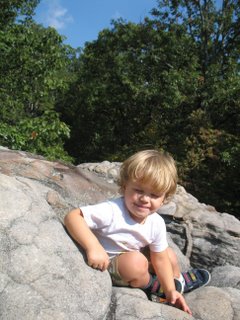 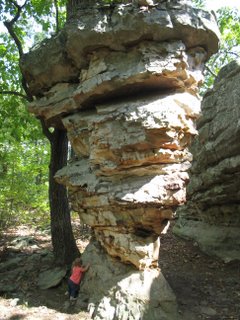 We (Infradig- www.infradig.net, www.myspace.com/infradigmusic ) finally got the CD done that we have worked on for two years (it releases officially on HALLOWEEN. We did a CD release show here in town last weekend that was a smashing success. Thanks especially to the old family men (Matthew P. Monahan, Scott W. Gast, David Q. McAlister, and Joseph "Thunderpex" Nichols) for breaking on through to the other side.

Posted by ihsoj at 1:02 PM 5 comments: Links to this post 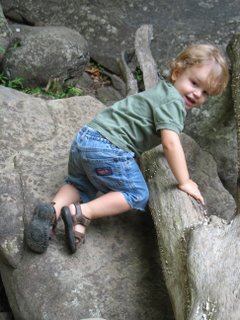 Juden has become quite the songbird in our house. His favorites are "Jesus loves me," which he sings, "Jesus loves me, he told me so...", "Jesus loves the little children," and a family lullaby called, "Birdies in the nest." He sings to Ella when she's sad, he sings while he plays and he turns it up and dances like crazy to his cd of sunday school favorites. My husband is something of a musical snob so it's a little funny to me to watch him get used to the whole world of kiddy music. It made me smile to listen to Josh sing song after song at Juden's request last night when he put him to bed. My son has a whole lot of his Papa in him, which makes me happy, but is also exhausting at times. We took the kids to Cloudland Canyon recently and Juden was fearless as he jumped from rock to rock with the same energy and adventure of his dad. So thankful for my men.
Posted by linda at 4:51 PM 2 comments: Links to this post

Well...we are finally getting on the blogging bandwagon, and hopefully it will help us stay in touch with folks a little better. We have had an eventful summer and it's been great in a lot of ways and hard in some others. It was nice having Josh around during the days. I guess time off in summers is one of the luxuries being a teacher affords, also the opportunity to tour. Josh kept up a pretty full schedule of regular shows and played several festivals including Bonnaroo, Smilefest, Riverbend, PAPAfest, Camp Bisco V, and Cornerstone. Anyway here are some pics of some summer highlights. 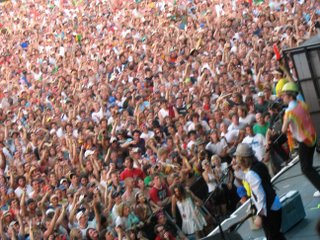 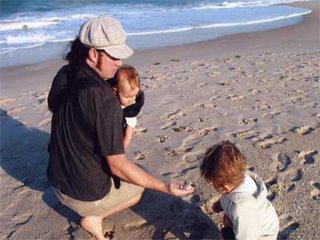 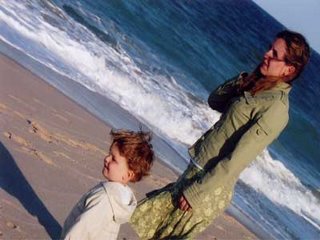 
Our lil girl, Ella, turned one in June. Here she is now trying to figure out
the whole walking thing. 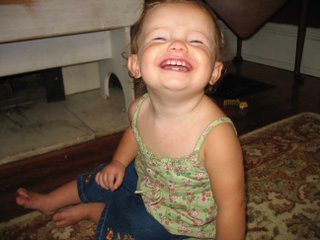 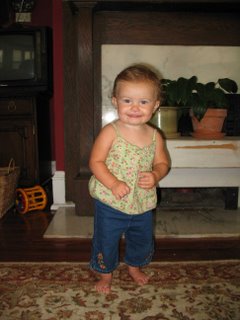 One more highlight is that we found out there will be baby Green #3 arriving around the time that Juden turns 3 in February!
Posted by linda at 4:32 PM 7 comments: Links to this post